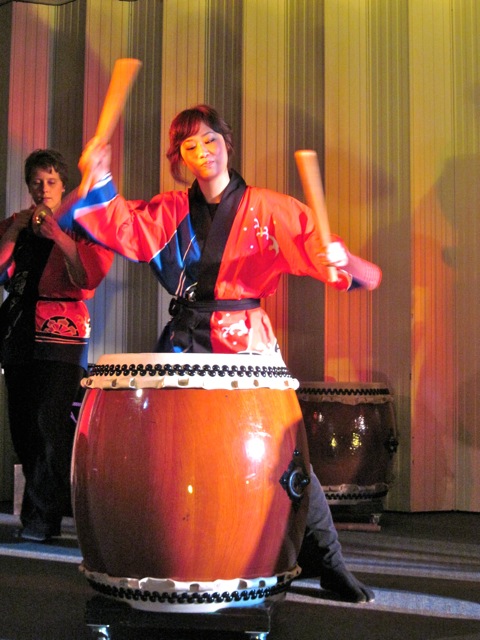 I love drumming. It pulls me into a place where I seem to absorb its pulsing thumps through my skin. Luckily, I found a gathering of life-minded souls shortly after we arrived in January, where a drumming circle meets in Hamilton monthly on the full moon.

I’m just a beginner, like many. But wow—there are some real pros, too. They put on a show with a half dozen types of drumming for the finale of Hamilton’s 2010 Fringe Festival. My favorite was Taiko drumming. It was performed by Wai Taiko, a play on the name of the region where we live—Waikato.

It was started by two exuberant young women after doing stints as high school exchange students in Kyoto. They returned to New Zealand with a crazy passion for big drums and loud noise. With two homemade wine barrel drums, they got Taiko drumming up and running in Hamilton.

I couldn’t help myself. I had to move from my seat to the floor, scooting as close as possible to the drummers as I could get. It felt like I was being swallowed whole by the sound. For sure, there was no sitting still. My hands and feet tapped frantically to keep up. What a spectacle!

Taiko means ‘fat drum’ in Japanese. Originated in China, it was adapted centuries ago in Japan for festivals and ceremonies. The edge of a village was said to occur at the farthest point at which Taiko could be heard. The explosive sound was also used in warfare to scare the enemy with the big sound.

In recent years, Taiko has morphed into an art form that’s been taken up by percussionists worldwide with great gusto. Perhaps I’ll trade my Jamaican drum for a Taiko drum. When the student is ready, will the teacher will appear?

This entry was posted in Arts & Culture, New Zealand Travel. Bookmark the permalink.